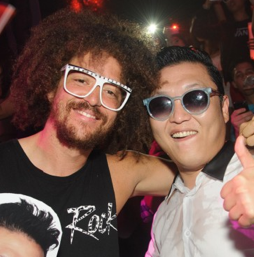 Las Vegas – Saturday night, international sensation PSY celebrated his YouTube hit “Gangnam Style” at TAO Nightclub. The Korean superstar donned a collared shirt and checkered pants, complete with his signature shades on the red carpet. He dined with friends at TAO Asian Bistro, enjoying signature dishes, and met Redfoo who was dining nearby.  PSY invited him to join them and together they did sake bombs and the Gangnam dance.

Upstairs the group took over several VIP booths in the nightclub where Redfoo and his party rock crew were seated beside them. The packed room went crazy when DJ Vice announced PSY’s arrival. Fans clamored to grab a photo of the music star as he stood on top of his booth to greet the crowd and take in the crazy club scene.

Glow sticks and PSY face cut outs filled the air as he took to the stage and performed “Gangnam Style.” The entire club went wild, dancing and singing along to the Korean tune. The TAO crowd couldn’t get enough as the room chanted for an encore performance. PSY granted the request, but first introduced himself and shouted out his country of Korea.  This being his first Vegas nightclub appearance, PSY was happy to perform again. Stating, “TAO you’re f****** awesome. Thank you for your support.”  PSY’s new manager Scooter Braun proudly looked on from the table and even held up one of the cut outs with his star’s face.

When he returned to his VIP table on the dance floor, confetti canons, a bottle fairy and a panda presented PSY with a cake, congratulating him on the success of his hit single and for breaking the Guinness World Record for most views in the history of YouTube. DJ Vice played a Gangnam Style and Party Rock mash up in which PSY did the Gangnam Style dance and Redfoo shuffled side by side.

Also at TAO for the night were the Jonas Brothers.  The siblings dined at the Asian Bistro and then Joe Jonas joined the owner’s table in the nightclub, along with actor Lucas Haas. 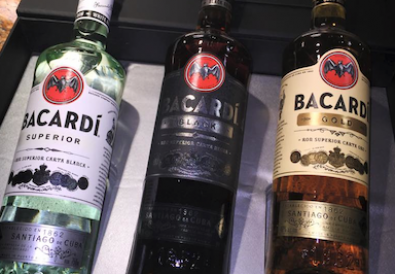 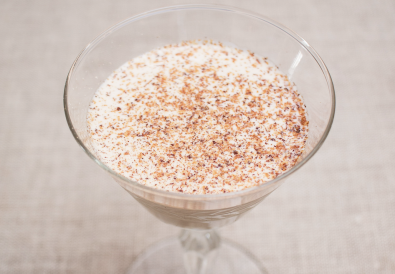 Nordic-Inspired SKYR Cocktail for the Holidays