by tips6247
The TIPSY Closet Tipsy Around Town
35 comments 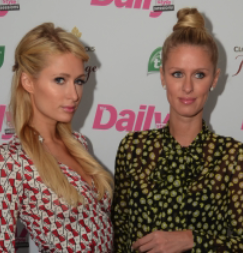 New York – From September 9-11, in the midst of Mercedes-Benz Fashion Week, The Daily Style Sessions took place at the Empire Rooftop at the Empire Hotel overlooking Lincoln Center.

The Style Sessions, presented by The Daily Front Row, invited celebs, media, and fashion insiders to an exclusive, luxurious retreat where they could recharge physically, mentally, and technologically.

Mercedes-Benz Fashion Week brought two old frenzies together, Nicole Richie and Paris Hilton.  The former “Simple Life” stars took time to retreat from the shows, stopping by The Daily Style Sessions.  Richie, looking chic in a burgundy and black leather jacket draped over her shoulders, ran into her “favorite” Real Housewife Caroline Manzo while relaxing in the Miami Oasis lounge.  The two bonded over stories about raising their children after Nicole had mentioned that she just celebrated her son Sparrow’s 3rd birthday a few days prior.  Meanwhile, Paris and sister Nicky Hilton definitely didn’t have babies on the brain. The two stopped in to get their makeup done by Clos du Bois Rouge Cosmètique and shopped for some very sexy Chantelle Lingerie while sipping lo-cal DISARONNO cocktails.

Newlyweds Kevin and Danielle Jonas spent the morning front row at Badgley Mischka and Vera Wang before heading over to The Daily Style Sessions to escape the madness at Lincoln Center. The two lovebirds also brought Danielle’s younger sister Katie along, so she could experience her first Fashion Week. The girls got Chantelle Lingerie sets, while Kevin couldn’t get enough Strawberry Fields Tic Tacs! In the Miami Oasis lounge, he was overheard saying that they all took it easy last night, while his brothers went out to the Marc Jacobs after-party.  He also mentioned that they’ve been very busy filming their reality show and excited about how it came out – it’s kept them busy, flying back and forth across the country. At the end of the day, Kevin seemed head over heels with Danielle, and tried to please her and her sister in every way. He is happy, if she is…

Kelly Osbourne had a hectic schedule this Fashion Week, but made time to stop by The Daily Style Sessions. Fresh out of filming “Fashion Police” across the street at Lincoln Center, the former reality-starlet swung by for a good cause. She insisted on signing the Tic Tac box benefiting breast cancer awareness. It’s a cause that Osbourne is passionate about after mom Sharon’s winning battle. Her boyfriend, Matthew Mosshart followed her every move, yet letting her stand in the spotlight the entire time. He was overheard talking about their recent trip to Chicago for Lollapalooza, and brought her Berocca for a quick vitamin boost before running back to the shows.

Former “Hills” starlet, Lauren Conrad was all business during Mercedes-Benz Fashion Week. The now fashion designer was in town to preview as many spring 2013 collections as possible. Between attending the runway shows at Lincoln Center, Conrad found time to stop in across the street at The Daily Style Sessions.  As soon as she arrived, LC ran straight to Downy Infusions to get some pointers on keeping fabrics bright to share with the readers of her new lifestyle website www.LaurenConrad.com. Before leaving for the next show, the newly single starlet shopped for Chantelle Lingerie and said, “one day these will come in handy,” as she grabbed a glass of Clos du Bois Rouge.

Shenae Grimes was in great spirits when she stopped by The Daily Style Sessions to meet up with friends before hitting the shows at Lincoln Center. The actress looked “stunning” in her angelic white dress, according to one of her guy friends. Grimes loved the compliments and said “maybe I’ll wear white more often,” in exchange for her usual goth-enspired ensambles. She even rushed over to Downy Infusions, proclaiming “I’m definitely going to need some of this today!” While there, the “90210” starlet also visited the Tic Tac photo booth to support CancerCare.

New York City’s wildest housewife, Ramona Singer stopped by The Daily Style Sessions to grab a drink between fashion shows.  The pinot grigio loving Ramona opted for a stiffer, low-cal DISARONNO cocktail while recuperating in the Miami Oasis lounge.  She was overheard yelling across the rooftop to her daughter “Avery, mama needs a vacation!”  Before leaving Ramona ran over to grab some Chantelle Lingerie sharing with the whole room “wait until Mario sees me in this!” College-bound Avery shook her head and went over to stock up on Downy Infusions now that she has to do her own laundry.

Ramona and Avery were almost out the door when they ran into New York City’s newest housewife, Aviva Drescher. Singer was shocked to see her anxiety-ridden cast mate at The Daily Style Sessions rooftop soiree, as Aviva has made her fear of heights and elevators abundantly clear this season! The polished reality mom was busy tending to her third son, who was complaining about how loud the music was. Drescher immediately sent her nanny to ask the DJ to turn down the tunes. After getting freshened up at Clos du Bois Rouge Cosmètique she tried on some Chantelle Lingerie, but the codependent housewife didn’t settle on anything proclaiming, “I need Reid’s opinion first.” When asked by a fan about the finale, the blonde beauty giggled and said, “it’s going to be one to remember!!”

The rules of class may have changed for LuAnn de Lesseps who lost her Countess status after her divorce from Count Alexandre de Lesseps.  The “Real Housewives of New York” star and author of Class with the Countess: How to Live with Elegance and Flair attended The Daily Style Sessions during Mercedes-Benz Fashion Week, and was not shy to grab to some sexy items from the Chantelle Lingerie in front of the other guests.  Apparently things have not cooled down with boyfriend Jacques Azoulay after her recent cheating scandal in St. Barths with a young Johnny Depp look-alike was made public. While picking out a suitable pair over DISARONNO cocktails, the 47-year-old mother of two gushed about her man and how she couldn’t wait to get home to show him her new intimates. Perhaps they’re still on the baby track!

Former “Real Housewives of New York” cast mates, Jill Zarin and Kelly Killoren Bensimon, just missed each other when stopping by The Daily Style Sessions.  While getting her makeup done by Clos du Bois Rouge Cosmètique, Zarin was busy bragging about a new “big rock” that husband Bobby just bought her, and telling guests that she was checking out Fashion Week events to get inspiration for her new jewelry collection which launched during Fashion’s Night Out at Lord & Taylor.  Longing for an exotic vacation, Bensimon used the rooftop retreat as an opportunity to wind down, getting a massage in the Miami Oasis lounge and recharging with Berocca vitamin supplements. The single mom was overheard saying that she has to stop dating her male friends and meet someone out and about in NYC. On her way out she was chatting to a friend about how she is trying to make her daughters “more domestic,’ and grabbed some Downy Infusions for them.

There’s no keeping a good woman down. Kristen Chenoweth recovered from her recent injury on the set of “The Good Wife,” to prove that she is no “fashion victim” as she made an appearance at The Daily Style Sessions.  Touting her loyal companion, a maltase Maddie, Chenoweth proved herself a trooper as she chatted with guests and took part in some well-desrved pampering in the Miami Oasis lounge.  Showing that she’s officially back in the saddle, she picked up some intimates from Chantelle Lingerie.

Adrienne Bailon and Kaela Humphries, have more than just their Kardashian connection in common.  The two fashion lovers hit up Lincoln Center to check out a bunch of shows throughout the week.  While stopping by The Daily Style Sessions, they bonded over lo-cal DISARONNO cocktails and showed their support for Tic Tac’s CancerCare campaign by jumping in the photo booth to snap some pics. 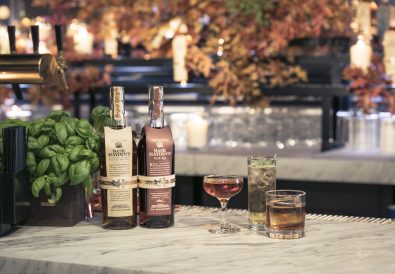 Get Ready for the Holiday Season with BASIL HAYDEN’S BOURBON 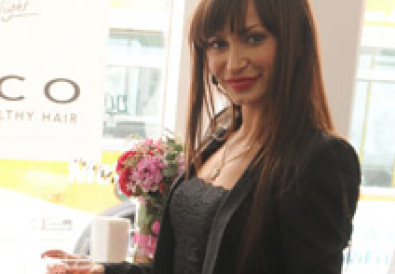 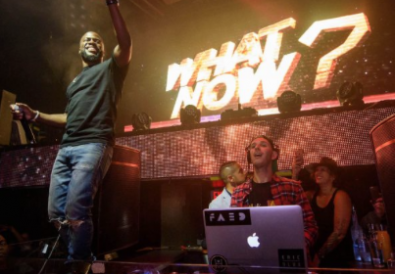