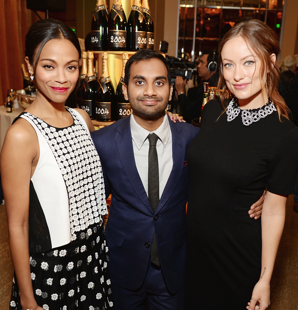 Moët & Chandon – the official champagne of the Golden Globes – raised a toast to the just-announced nominees for the 71st Annual Golden Globes at the Beverly Hilton in Los Angeles. Moët & Chandon joined presenters Olivia Wilde, Aziz Ansari and Zoe Saldana in celebrating this year’s biggest actors, actresses, movies and television shows as Hollywood begins its countdown to the 2014 Golden Globes.

Olivia Wilde, the expecting mother-to-be barely showing in head-to-toe black – arrived poised and glowing, joining co-presenters Aziz Ansari and Zoe Saldana on stage. Aziz Ansari was all smiles as he took his seat between Olivia and Zoe, surrounded on both sides by two of Hollywood’s most beautiful leading ladies, leading him to be touted as “no doubt the happiest man in the room at this early hour.” When he took the stage to read this year’s nominees to the jam-packed ceremony, he joked, “This is so easy and I’m somehow scared I’m going to mess it up!” – and indeed he did fumble when pronouncing “August Osage County,” leading the entire room, including Olivia and Zoe, to laugh, but the ever-hilarious actor recovered quickly (after a few laughs himself) and carried on with the nominations.

When exiting the stage, Zoe beamed at the sky-high tower of Moët & Chandon Grand Vintage 2004 – which will be poured on the tables during this year’s awards ceremony – and exclaimed, “Oh, champagne – perfect!” though she politely declined a glass of Moët for herself. The Moët & Chandon champagne tower caused a bit of a traffic jam at the stage, with everyone admiring the bottles, but the gracious Sosie Bacon – Miss Golden Globe 2014 – came to the rescue and graciously let Olivia exit before her. 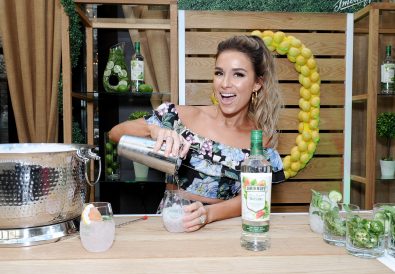 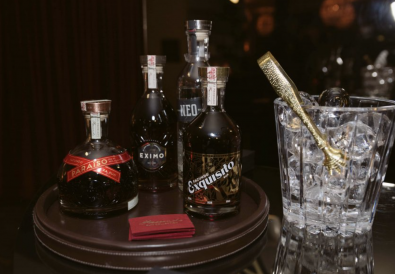