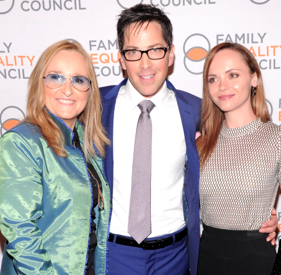 New York – On Monday night, the Family Equality Council hosted its 8th Annual “Night At The Pier” event at NYC’s Pier 60. VIP guests at this premiere New York City event including Christina Ricci, Dan Bucatinsky and Melissa Etheridge, who arrived with partner Linda Wallem, posed for photos on the red carpet before mingling with FEC execs and honorees during the cocktail hour. Guests sipped on Bellini’s and bid on silent auction items before heading into the ballroom for a seated dinner and a night full of heart-felt speeches and great performances.

Edie Windsor, plaintiff in the federal marriage equality case before the Supreme Court case, presented the evening’s first award to lawyer Roberta Kaplan. Award-winning Broadway Producer Darryl Roth presented the Hostetter-Habib Family Award to Jennifer Chrisler, one of the nation’s leading advocates for LGBT parents and their children and Executive Director of FEC. Lastly, Actor/writer/producer Dan Bucatinsky was honored for his ongoing efforts to advance the rights of LGBT families in an award presented by Singer Melissa Etheridge and actress Linda Wallem .

The night ended with a live performance by Debrorah Cox and then a surprise speech and appearance by Cyndi Lauper who introduced the cast of her Broadway musical Kinky Boots who ended the evening with a fun performance for the crowd.

Melissa Etheridge arrived hand-in-hand with partner Linda Wallem with all smiles and was very excited for the evening and to celebrate an organization very dear to her.

Linda Wallem presenting an award to ABC’s Scadal producer Dan Bucatinsky, as the two both gave very heart felt speeches for the crowd.

Christina Ricci posed for photos on the red carpet before mingling with fans and event-goers during cocktail hour, then enjoyed the presentations and performances during the dinner.