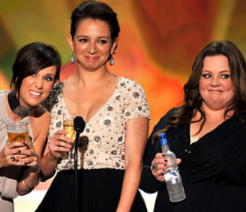 Los Angeles – Awards ceremonies, schmaward schmeremonies! The only thing that can make these babies better is more alcohol! And what better way to incorporate more boozing, than with a drinking game.

Presenters Kristen Wiig, Maya Rudolph, and Melissa McCarthy with GREY GOOSE in hand, explained that EVERY TIME Martin Scorsese’s name is mentioned, you gotta take a drink. That’s an almost guaranteed road to inebriation out here in Hollywood. Melissa McCarthy sure took a lot of chugs just during her short time on stage.

The Hollywood crowd seemed to embrace the boozing. Steve Buscemi, while being honored for his work in “Boardwalk Empire,” thanked his executive producer, Scorsese, and Tina Fey then chugged Buscemi’s wine.

Get Your Game On with Cocktails for the Perfect Tailgate!