by tips6247
Tipsy Around Town
10 comments 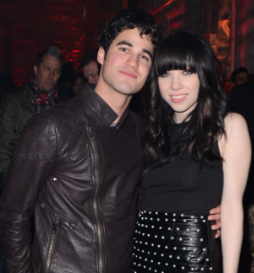 Los Angeles – On Friday night, all of the stars came out to kick-off Grammy weekend and celebrate at one of the hottest parties of the year, The 16th Annual Friends ‘N’ Family Pre-Grammy Party hosted by the music industry’s top executives. Carly Rae Jepsen was the highlight of the night when she performed her hit ‘Call Me Maybe’ in front of thousands of VIPS and excited guests. The night was a family affair for both Carly Rae Jepson and Bella Thorne, both of whom brought their moms as dates.

Before Carly’s impressive performance, she was spotted catching up with Glee stars Darren Criss and Harry Shum Jr. Harry then stopped by the SPiN Standard ping-pong tables and challenged his girlfriend Shelby Rabara to a game while Cody Simpson and Tristan Wilds played against friends at the next table.

Kat Graham was all smiles with her fiancé as they mingled in the Heineken lounge with Macy Gray, Alexander Ludwig, Alexandra Chando, Charisma Carpenter, Nick Lachey, AJ McLean, and Robin Antin who was with The Paradiso Girls. Lucy Hale and Jesse McCartney were also spotted chatting in the lounge while Adam Lambert was seen sipping on a Heineken. Cheryl Burke was seen dancing the night away in the DJ Booth and the crowd enjoyed sounds from the band Wallpaper, Angel Haze, and Paul Oakenfold until the wee hours of the morning.

The ‘Art of Rum’ Brings the BACARDÍ Sipping Rums to Life at Renowned Auction House, SOTHEBYS