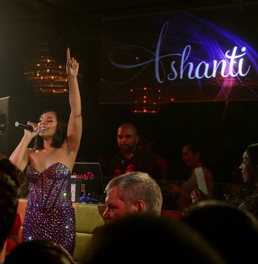 Las Vegas – Over the weekend, Grammy award-winning R&B singer Ashanti dined with friends and family at LAVO Italian Restaurant, kicking off her night of birthday celebrations. Before heading into LAVO Nightclub, she dazzled the red carpet in a purple crystallized dress, posing for pictures with her parents and producer L.T. Hutton. Shortly after taking over a VIP table inside LAVO, the singer took the stage to perform a master medley of her biggest hits. The ecstatic crowd erupted as the first notes of “Only U” began to play. The songstress then belted “Rock Wit U,” “Happy,” “Always On Time” and “What’s Luv.” All smiles, she thanked the crowd for celebrating her 33rd birthday with her before returning to her table. LAVO then presented the birthday girl with a shimmering pink three-tier cake adorned with a microphone and branded with the name of her upcoming album “Braveheart,” which is set to release in November. A storm of confetti and cheers added to the surprise as the room wished her a very happy birthday, but Ashanti also had a surprise of her own. Afterward, she snuck into the DJ booth holding a flash drive with her brand new single “First Real Love” featuring Beenie Man. She slipped the song to DJ Gusto who announced the premier to the crowd. Excited fans grooved along to the new tune as the party continued into the night.

At TAO, comedian Dane Cook started his night with friends in TAO Asian Bistro’s dining room. The group enjoyed Grilled 12 oz. Kobe Ribeye with Yuzu Cilantro Butter, Satay of Chicken and Wasabi-Crusted Filet Mignon as they toasted to their time in Las Vegas. They then made their way to a VIP table at TAO Nightclub where they partied to the sounds of DJ Vice. 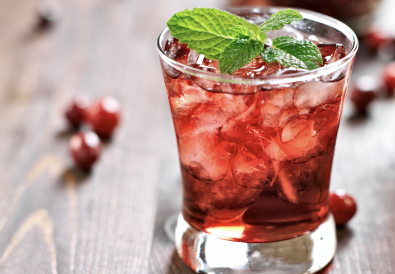