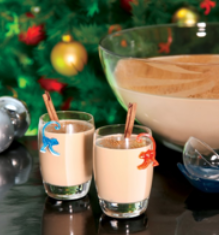 For holiday cocktails, KAPPA has put their own spin on a traditional Chilean Christmas cocktail called “Cola de Mono” (translated: Monkey’s Tail).  Cola de Mono is served in Chile around the holidays, similar to eggnog in the U.S.  KAPPA’s version, called “KAPPA Monkey Business,” is a rich and flavorful cocktail, easy to whip up en masse for spirited holiday entertaining.

Check it out below!

Luck of the Irish? Catch it with LUCKY BUDDHA BEER